“We are trying to better understand biological sonar so we can mimic it in our own devices.” Dr. Kloepper, Saint Mary’s College 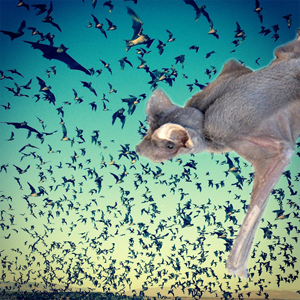 Thanks to a very resourceful research team and some highly advanced technology, another of nature’s mysteries is closer to being understood. As the daughter of a botany professor, Laura Kloepper, Ph.D, Assistant Professor, Department of Biology at Saint Mary’s College in Notre Dame, Indiana, had long been interested in biomimicry — the idea that animals have evolved ways to deal with challenges that can lead to solutions for the problems we face. This led her to want to understand how bats and dolphins accomplish something that we think should be impossible: using their echolocation, or biological sonar, in groups. Everything we know about science tells us the sounds from all the bats should interfere with one another and “jam” their sonar system.

An understanding in this area could lead to technological advances that could benefit fields as wide-ranging as autonomous car navigation, vehicle navigation for poor weather, self-navigation for the sight-impaired as well as various military applications including sonar and radar.

However, a major impediment to understanding how bats accomplish this is the need to get precise audio and video recordings from inside a large swarm of bats. Drones can be used for less dense bat flight, but another more creative solution was needed for recording the dense emerging swarm.

After a serendipitous meeting with Oxford Biologist Graham Taylor, at the Google-hosted, Science Foo Camp, Dr. Kloepper pursued the unorthodox solution of having a trained hawk, equipped with a sophisticated recording rig, fly through the bats as they swarmed from their cave at sunset. Assisted by Dr. Bob Stevenson, Associate Chair and Director of Undergraduate Studies, Department of Electrical Engineering, University of Notre Dame, and Paul Domski, President of the New Mexico Falconers’ Association, as well as Saint Mary’s students, they set out constructing a rig and planning the field research.

Along with the obvious complications of relying on perfectly timed flights by a trained hawk through a swarm of bats, another major constraint was making sure the total weight of the rig didn’t exceed more than 10% of the hawk’s total body weight.

"We are taking apart an off-the-shelf camera to adapt for flying on a hawk for my biological field research.” An email from Dr. Kloepper to I-PEX

Identifying the need for ultra-sound recording microphones plus hi-res video imaging equipment, the team identified the Panasonic HX-A500 4K Wearable Action Camera as a potentially suitable option. Tasked with greatly reducing the weight of the camera, the team disassembled the unit and found I-PEX inside. Contacting Mark Ernstberger, Regional Sales Manager, I-PEX, they included the following: “We need three cables that are 9-10 inches long with the connectors soldered onto each end. I’ve attached pictures of the connectors, so hopefully you can verify these are indeed I-PEX® CABLINE®-UA II Micro-Coaxial Cable Connector part 20496-040-40.” Armed with this information, Mark set out to assist them in constructing a lighter, more effective rig.

As Mark noted, “they needed a custom, CABLINE-UA II cable assembly 40-pin type cable, that was shorter and lightweight so it would connect the camera to their controller. We reviewed the schematics and pin-out to help provide a custom harness. The rig had to have a miniaturized footprint. Mitas Electronics, our assembly partner, supported the harness build.” And while I-PEX normally handles a wide variety of custom builds for their clients, this request was certainly one of the most unique. The innovative, low-profile rig, similar in power to tablets and mobile phones, could now handle 10 times the signal and data and do so with 10 times less weight. With a high data rate transfer ensured by the CABLINE-UA II connector, the camera could operate in very low-light and provide a dependable HD signal, all while being subjected to very rugged usage.

With Dr. Stevenson’s assistance, the team hit the benchmarks of 10 grams for the head unit and 40 grams for the back attachment. This included the hi-res camera and ultra-sound microphones for bat “call” frequencies between 25 and 75 kHz, as well as all audio and stereo cabling modifications.

Both the interdisciplinary team and their enthusiasm continued to grow for the project. Equipped with the custom rig that was light enough to support the hawk’s flight, and still able to securely record a high amount of data, Dr. Kloepper and her associates headed to New Mexico and large colonies of Brazilian free-tailed bats. The research provided extremely detailed recordings from inside a moving group of bats. This invaluable research will allow Dr. Kloepper and her associates to better understand what strategies bats employ to avoid sonar jamming.

The hawks are raised, trained, and handled by experts at all times. Proper permitting and all safety regulations were observed, and the hawk, trained via positive reinforcement and motivated by a food reward, did not attempt to interdict the bats during flight.

The flights themselves were short, often lasting no longer than four seconds and at no times were the hawks or bats placed in danger.

The lightweight rig proved to be more than robust enough to handle repeated flights by the hawk through the bat swarm, all while recording invaluable audio and video data. Plus, the rig and experiment created a new term: the “Hawk Cam.”

Considering the synchronization required between highly technical equipment, technicians, researchers, bats and hawks, this first field attempt achieved the necessary proof-of-concept. The team was able to capture quality data and identify ways to improve the unit for future field research. Already, there is some evidence that bats may shift the characteristics of their sounds so they don’t overlap with other bats, but much more field work and careful analysis will be required before conclusions can be drawn. The team at I-PEX will continue to assist with technological advancements to further refine the unit’s performance.

“We will make the next generation harness even lighter and more effective.” Mark Ernstberger, I-PEX

For continued research in this invaluable field, success can be measured in traditional ways: technological progress, patents, practical applications and proven innovation.

For Dr. Kloepper, her view on success includes something else: in addition to completing what would amount to groundbreaking research and industry applications, she wants people outside her field to understand the potential gains and become as excited about this research as she is.

For the people of I-PEX, measuring success means continuing to provide state-of-the-art advancements that solve the needs of the technology industry, as well as providing highly customized solutions for people, companies and organizations that continue to reshape the way we will live.