Drones: A Source of Inspiration

In recent years, drone racing has generated great excitement all over the world by creating a world drone champions league. In Japan, there is also a professional drone racing team, DMM RAIDEN RACING, that competes with other teams around the world. The I-PEX® MHF® I LK Micro RF Coaxial Connector is used in their drone. We interviewed Junichi Goto, captain of DMM RAIDEN RACING, and Tetsuya Tagawa, I-PEX Connectors engineer and MHF I LK Development Team Leader, about the background of the MHF I LK in drones.

Felt an unprecedented shock when I discovered Drone

― Thank you for joining this interview today. First, could you talk about Mr. Goto's career as a leading drone racer in Japan?

Goto: I was working as an IT engineer about two years ago, and I was living without a drone. However, I accidentally saw an aerial drone video on YouTube and it made a huge impact. I was very impressed at such a powerful image and acrobatic flight. Thanks to this first great impression, I decided to step into the world of drones. However, at this time, I had not thought that I would participate in the drone race as a representative of Japan.

― It seems that you were not originally thinking of to becoming a drone racer. What made you become a racer?

Goto : At first, I was planning to do an aerial video shoot using a drone as my main activity, so I published FPV (first person view) videos on social media networks, such as Twitter. The director of JDRA (Japan Drone Racing Association) invited me to try racing via the social media network. Since I was promptly invited, I began with a light feeling that I should try it once, but now I am addicted. I do not like to lose and I was racing with the desire to win over the game. At that time, I became a professional racer. Since drone racing still has a small number of players, when I participated in a race individually, I had to purchase the drone parts and maintain the drone by myself. I won at the domestic drone races, and finally in 2017, I was able to win the Japan Drone League's annual championship. Since 2018, I have been working as the captain of Japan's first professional drone racing team, DMM RAIDEN RACING, and am competing around the world at the "Drone Champions League," the highest peak of the drone races. The team's annual ranking was fourth place.

New issues and goals as I became a professional racer

― Did your situation change when you were doing it individually vs. after joining the race team?

Goto : The cost burden has decreased considerably. When I was doing it on an individual basis, I had to do everything from parts procurement to maintenance, which required a lot of time and money. The speed of innovation is fast and new parts were released once every one to two months at peak times. I had to buy new parts and try them, so the burden on the individual was quite large. I was using money I had saved, so I think my family was actually worried.

However, after I was able to win and get good results in the game, I have gotten sponsors, which helps to reduce the cost. In addition, by belonging to the race team, we were able to share knowledge and technology among the members. This helps us to compete together in the games as a team. The pilots of DMM RAIDEN RACING were very particular, down to even the small parts and aimed at victory in the games. 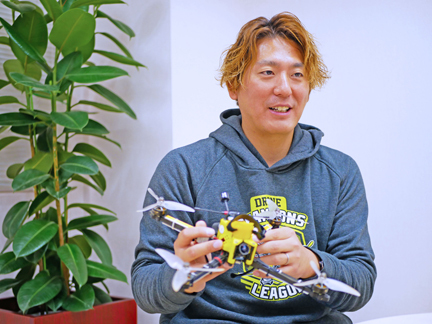 ― MHF I LK, the product of I-PEX, is used on your drone for racing. How did you know about this product?

Goto : Drone racing is a new sport that was created recently. Because new rules and standards are not decided completely, frequent maintenance of the drone has to be done to follow each game’ s regulations. Even if the drone itself is small, we fight at a very high-speed in the game, so accidents and breakdowns are very likely to happen. I asked my friend’ s advice on how I can easily maintain the drone, and then, my friend introduced me to Mr. Tagawa of I-PEX who was in charge of the MHF I LK development team.

Extension of work and hobby links

― Introduction to friends in vastly different fields is unique. Why  did Mr. Tagawa have such a connection?

Tagawa : Actually, I also like drones and I participated in some drone races as a hobby. The number of drone owners and specialists are still small. It was natural to have a stronger relationship among them, which led to the formation of a community. Mr. Goto and my friend were in the same community. MHF I LK is made for the purpose of being able to endure in high vibration environments such as drones, PCs, cars and aircraft. The lock is robust, but removal is easy.

In order to take advantage of the characteristic that it can be used from 2.4 to 6.0 GHz band, it first began to be used for individual drones. At that time, I was consulted by Mr. Goto, so I introduced MHF I LK based on my own experiences.

MHF I LK with the necessary technology to win

― What was your impression of actually using MHF I LK?

Goto : I thought it was a breakthrough product, not flattery. Other connectors that I knew of did not have a locking function and were just being fitted. Therefore, in order to increase the strength, I used bonds or tape to prevent the connector from coming off during a race. It took a lot of time and effort to remove them every time the drone needed maintenance and rework it again after the maintenance was done. Many times I had to finish the maintenance in a short time before the next race and the additional work created a lot of stress. Moreover, since it is a part that uses radio waves and electricity as well, adverse effects by bonds and tapes are concerning. In the world of racing in which the number of seconds is contested, even a slight incongruity of operability cannot be ignored.

Tagawa : Even if the drone race was a world event, the rules can change two weeks before the game. Then it becomes an issue of how to eliminate the maintenance work and how to rebuild it quickly, which is a very important factor for deciding the winner/loser.

Goto : Exactly. I think that the same thing can be said for other races such as cars and motorcycles, but eventually it is the racer’ s skill that separates out the win or loss. The result of the race will change greatly depending on how long you can associate with that drone and make good use of its characteristics and strengths. Because the rules were changed just before the race, there were races that caused a lot of crashes, even amongst experienced pro racers since they were unable to get in practice time.

Tagawa：Since I knew the situation, I focused on the lock mechanism development. If the lock is compacted too much, the receptacle which is the connector on the main body side will peel off, possibly damaging the board. If that happens, it will take a lot of time to repair, so we added a function that locked properly, but in case of an emergency it will come off with proper force.

Goto：Now I see. Because Mr. Tagawa also has racing experience, he understands what we go through during a competition. I was very thankful to Mr. Tagawa for taking care of such detailed parts.

More close to the drones, feel free to touch the drone world

― What are your future goals?

Goto :The people participating in drone competitions are getting increasingly younger, with a 17-year-old being in the top world rankings. I will be 37 years old this year, so I am not considered young in this field. That is why I'd like to put more emphasis on developing young racers in the future. For example, in addition to a pilot who actually maneuvers the drone, there is also a role of a co-pilot that gives instructions while watching the entire race. It might be a good idea to take advantage of my skills and knowledge to help in developing the younger racers by becoming a co-pilot.

Goto : I would like to work more seriously on the drone video shooting that got me into the world of drone. AI technology has developed, and drone maneuvering has become relatively easy, but in fact there is still a lot that cannot be done without human hands. I would be happy if I could become a role model who shows what kind of potential jobs are there and what kind of life is possible with drones. In that sense, I think that we still need to know more about drones, and the time it takes for hands-on maintenance will continue for a long time. MHF I LK may become necessary more in the future than in the present.

Tagawa : It is truly appreciated that there are people who evaluate and use MHF I LK in this way. I am pleased if I can continue to work on improving products as an engineer of I-PEX and contribute to creating an environment where people can experience the field of drones more easily.

― Thank you for your time today.