I-PEX has developed an ultra-thin active optical cable plug module “I-PEX Embedded Optical Blade (I-PEX EOB)” which is only 2 mm in height, using the Silicon-Photonics IC ”Optical I/O Core” offered by AIO Core Co., Ltd. (Head office: Bunkyo-ku, Tokyo, President: Hidetaka FUKUDA, mentioned as “AIO Core” hereafter). The I-PEX EOB transmits 100 Gbps (25 Gbps x 4ch) over 300m of multimode fiber cable.
By utilizing the small and ultra-thin features of the I-PEX EOB, electrical-to-optical and optical-to-electrical (hereafter referred to as “electrical-optical”) conversion in a position that is close to the processor is now available and can dramatically decrease the transfer loss which used to occur in the electrical wiring between the processor and the edge of the board. This new module can handle the demand of high data rate transfer alongside the increase of data processing volume.

Optical fiber communication is becoming standard for inter-system connection and long-distance transfer. Generally, there is electrical wiring inside the device and after converting from an electrical signal into an optical signal at the interface of the device, it is then sent out along the fiber cable. Along with the increase of transfer data and its increase of speed, the transfer loss due to the electrical wiring between the processor and the edge of the board (inside the system) is considered a bottleneck. One solution is making the optical transfer inside the device available by positioning the electrical-optical conversion circuit and components closer to the processor. On the other hand, there is a critical space limitation on the board since there are many circuits gathering on it. Moreover, since the components for thermal countermeasure exist around the processor, the electrical-optical conversion module is used to get some distance from the processor.

Recently, I-PEX adopted the ultra-small Silicon-Photonics IC “Optical I/O Core” made by AIO Core to solve this problem. We developed the connecting technology to pull out the multimode fiber from the Optical I/O Core horizontally, while keeping the height of the device low. We have conducted prototype manufacturing of the I-PEX EOB combined with a cable plug, integrating all of these technologies. The prototypes succeed in the long-distance transfer 100 Gbps (25Gbps x 4ch) over 300 m with the Optical I/O Core. 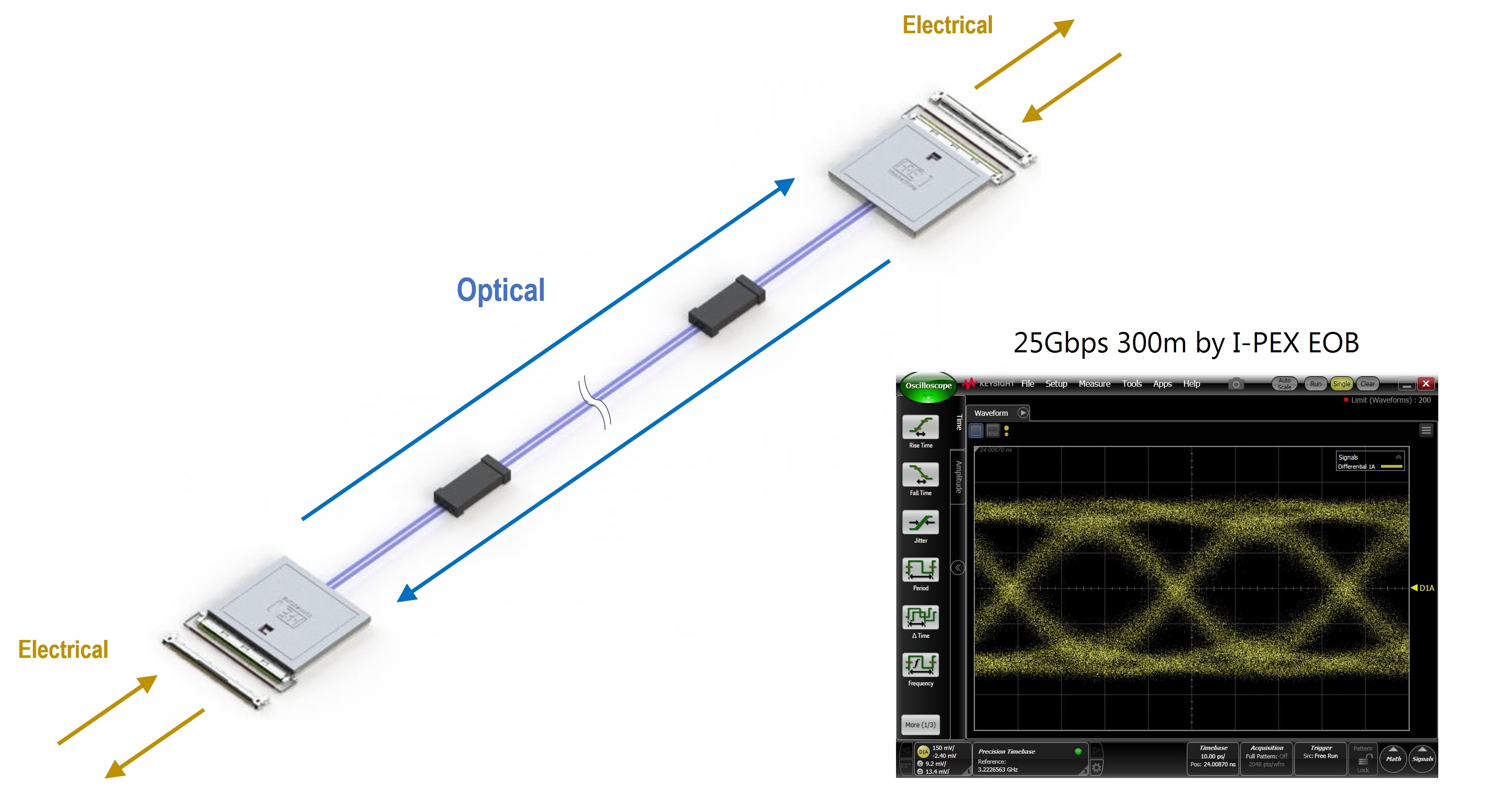 I-PEX EOB is only 2 mm in height and has the shape of an ultra-thin plug connector with a mechanical lock. This entire package will fit under a large heatsink, allowing the electrical-optical conversion to be closer to the processor. The controller IC which drives the optical I/O Core is integrated in this module, therefore, it is now available to set a circuit of electrical-optical conversion into customer’s devices without any complicated system change.

I-PEX is going to make this solution into a marketable product and start mass-production. Contact us for more information.

About AIO Core Co., Ltd. and ”Optical I/O Core”
AIO Core Co., Ltd. is the first Incorporation-type divided company under an approval of the Ministry of Economy, Trade and Industry (METI). AIO Core has inherited the intellectual property rights along with some parts of technology from Photonics Electronics Technology Research Association (PETRA) and was newly divided from the organization.  This development was accomplished by PETRA under the trust from New Energy and Industrial Technology Development Organization (NEDO). The Optical I/O Core mass-produced by AIO Core has a feature of 5mm square with an optical transceiver chip manufactured with “Silicon Photonics technology” which is to form optical elements on silicon board. It has the transfer rate of 25 Gbps/ch and is able to have two-way transmission with the transfer rate of total 100 Gbps at In/Out 4ch.